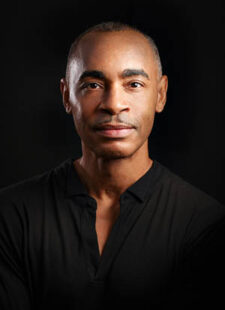 DONALD WILLIAMS – A Chicago native, studied first with Larry Long of the Ruth Page Foundation, then accepted a scholarship to Dance Theatre of Harlem in New York City and subsequently joined the DTH Company.  He became a Principal Dancer in 1983 and ended a 27 year company career as Premier Danseur in 2004.

As a principal guest artist, Mr. Williams has performed with London’s Royal Ballet at Covent Garden, the International Ballet Festival in Cuba, partnered Cynthia Gregory in the “Gala of Stars” in Bilbao, Spain and starred in many international galas. He has worked with Complexions, Dances Patrelle and Fugate/Bahiri Ballet NY, creating critically acclaimed, original roles with them as well.

Mr. Williams made his film debut in “The Cotton Club” and starred in the Emmy nominated “A Streetcar Named Desire” which was broadcast over the PBS series Dance In America, as well as the Peabody Award winning “Firebird”, which was broadcast over PBS in the Kennedy Center Tonight Series. He was also featured in the Motown 30th Anniversary Special as well as numerous other television appearances and commercials.

In 1998, Mr. Williams made his Broadway debut in the Tony Award winning musical “Ragtime”. In 2000, he was principal guest artist in the New York City Ballet/Dance Theatre of Harlem collaboration for their Diamond Project, dancing the principal roles in Robert Garland and Robert LaFosse’s “Tributary” and Balanchine’s “Agon”. He was featured in the national tour of “The Phantom of the Opera” and most recently with “Phantom: The Las Vegas Spectacular” at the Venetian Resort and Casino until 2012.