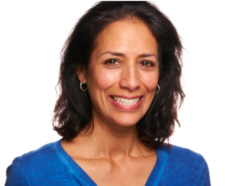 Ms. Morales is a native of Brooklyn, NY and graduate of The Juilliard School where she received her BFA Degree in dance. Her professional career includes Eglevsky Ballet, Maryland Ballet & Eugene Ballet before joining The Dance Theatre of Harlem under the direction of Arthur Mitchell. She rose through the ranks and was promoted to principal dancer. Her featured roles include; Waltz Girl in Balanchine’s “Serenade”, Medea in Michael Smuin’s “Medea”, Princess of Unreal Beauty in John Taras’s “Firebird” and Myrta in Fredrick Franklin’s staging of “Creole Giselle”. In addition to dancing, she served as assistant rehearsal director to the company and Master Teacher for their “Dancing through Barriers”, outreach program both in the U.S. and abroad. She also performed as guest artist to various companies in the U.S. Ms. Morales was selected to model for Capezio and has been seen in Oprah, Mademoiselle, Pointe, and Dance Magazine as well as Italy’s Io Donna. Following her performing career, Ms. Morales served as director to The Harkness Youth Ballet @ 92nd Street Y and later Ballet Mistress to Staten Island Ballet. Currently she is Ballet Mistress at New Jersey Dance Theater Ensemble, a pre-professional training school in Summit NJ. Ms. Morales guest teaches throughout the United States at dance festivals, dance conventions and companies. She is a certified teacher of Zena Rommett Floor-Barre® technique.